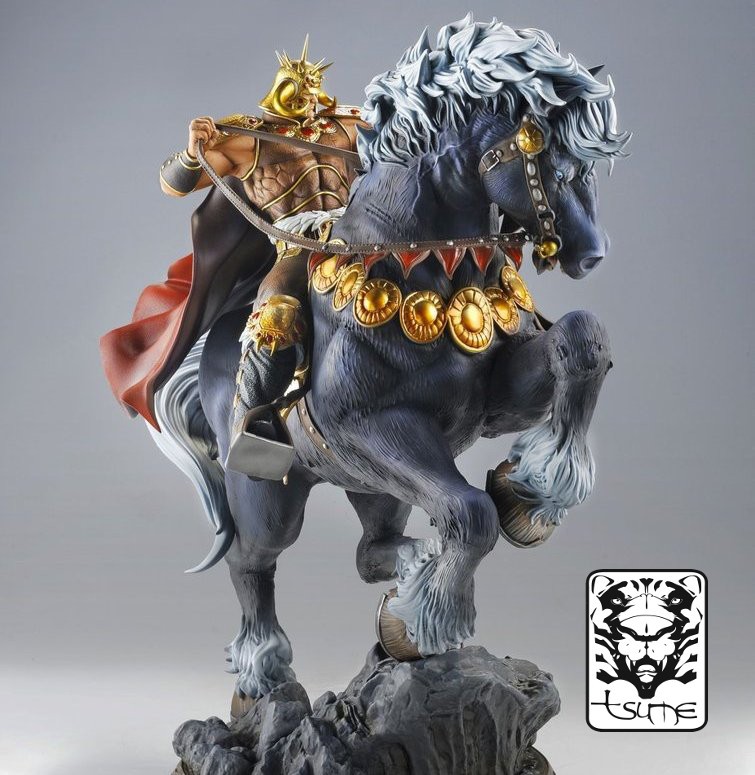 Introduced to the audience of the Tsume Fan Days 2 last autumn, Raoh – King of Hokuto is our first work based on the famous manga Hokuto no Ken (Fist of the North Star). Check out this great HQS by Tsume resin statue, our impressive tribute to Kenshiro older brother, a man with unmatched ambition!

This large scale statue features Raoh on top of a cliff, riding his loyal steed, Kokuoh. His left hand stretched forward while he holds the reins with his right hand, Raoh looks like he is ordering his army to march forward.

You may find Raoh’s sculpting style more realistic than some of our other statues. In any case, this piece of art display a very precise sculpting which will satisfy the most enthusiastic fans. Raoh’s face and his clothes ornaments feature numerous details while his skin, his cape, or his armour display stunning texture effects.

The statue’s painting job is built on strong contrasts between golds, bronzes, leathers, and fabrics. their brightness are emphasised by the dark tones of Kokuoh and its rider. Frozen as it reared up, the horse is standing on a stone ground ; this ground being circumscribed within our usual circular and beveled base, our collection trademark.